The price of Bitcoin surged past $11,000 for the first time in 13 days as traders discuss where BTC is headed next.

The price of Bitcoin (BTC) broke above $11,000 at last, after 13 days within a tight range. But this time, the market dynamic is different because Ether (ETH) and most decentralized finance tokens are declining.

As Bitcoin rose to as high as $11,024 on Coinbase on Sept. 16, Ether, DeFi tokens and the majority of altcoins stayed stagnant. The contrasting performances between Bitcoin and the rest of the market make the ongoing BTC rally unique.

Some traders suggest that profits from Ether and DeFi tokens are being cycled into Bitcoin. Others have hinted that MicroStrategy’s bulk purchase of BTC led the spot prices of the dominant cryptocurrency to increase. MicroStrategy purchased an additional $175 million worth of BTC, which would add $7 billion to BTC’s market capitalization, as on-chain analyst Willy Woo noted. In the spot market, an order that exceeds $100 million could trigger a slippage of over 3%. Denis Vinokourov, head of research for digital asset exchange and brokerage firm Bequant, told Cointelegraph:

“Any immediate concerns over the sustainability of certain DeFi-based offerings are likely to provide a degree of support for Bitcoin. Thus, ETH and BTC may remain on a downward trend. However, that market appears to be overly fixated on DeFi and is ignoring positive developments that have come out of Ethereum over the last few days, which indicate the transition to 2.0 is very much on-track.”

Nonetheless, after the breakout of Bitcoin above $10,500, a level that has acted as a strong resistance, the sentiment of traders is mixed. Some traders believe that BTC will face rejection at the $11,000 level. Others foresee a continuous rally past the $11,000 mark, due to optimistic on-chain indicators.

The bullish case for Bitcoin

The bullish case for Bitcoin in the short term is a retest of the $11,000 resistance level without a steep rejection. Traders generally expect BTC to enter the $11,000–$11,300 resistance range. But given its historical relevance, technical analysts anticipate a strong pullback after achieving that price point.

If the price of Bitcoin remains relatively stable after rising above $11,000, that would amplify the bullish case for Bitcoin. In the medium term, there are two key levels for BTC: $13,000 and $16,000. The $13,000 level is a resistance area that Ark Invest CEO Cathie Wood previously discussed. The $16,000 level is one of the two currently open CME gaps, with the other being at $9,650. 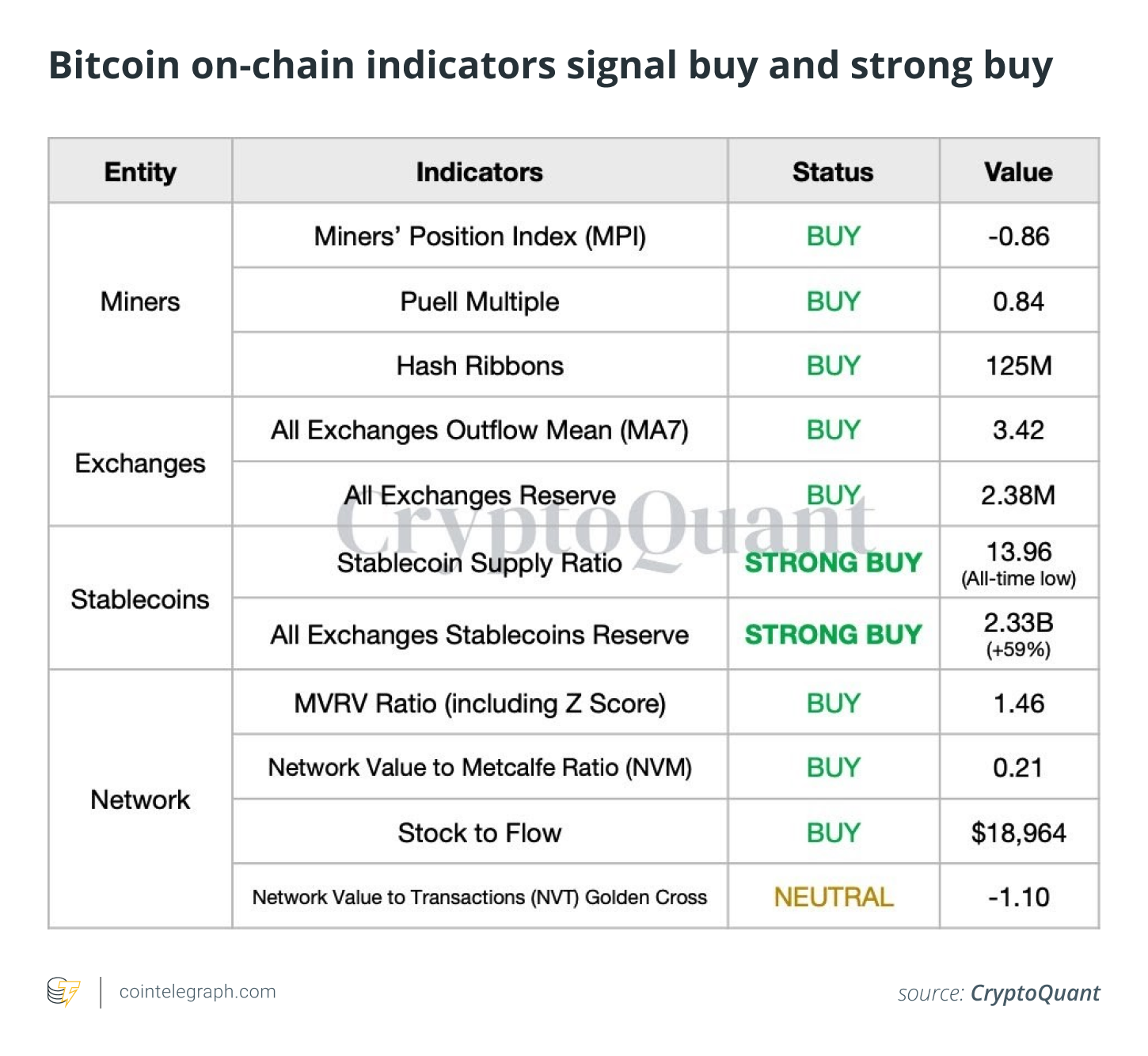 Stablecoin and miner-related indicators, especially, signal an optimistic long-term trend for Bitcoin. It shows there is an abundance of capital on the sidelines stored in major stablecoins. Because stablecoins, such as Tether (USDT), account for a large portion of BTC’s daily volume, it shows that large amounts of capital are ready to enter the crypto market.

The bearish case for BTC in the near term

On Sept. 8, before the current Bitcoin price rally commenced, a crypto trader known as “Edward Morra” said there are two short-term CME gaps of $10,620 and $9,600 left, but which one will get filled first is uncertain. He hinted that the higher gap would likely fill first, and the other might follow:

In a follow-up analysis, Morra said: “Now let’s see if lower one gonna be filled.” Technically, a move up to the $11,000 resistance level and a drop back down to the $9,600 support level is a healthy minor correction for BTC. 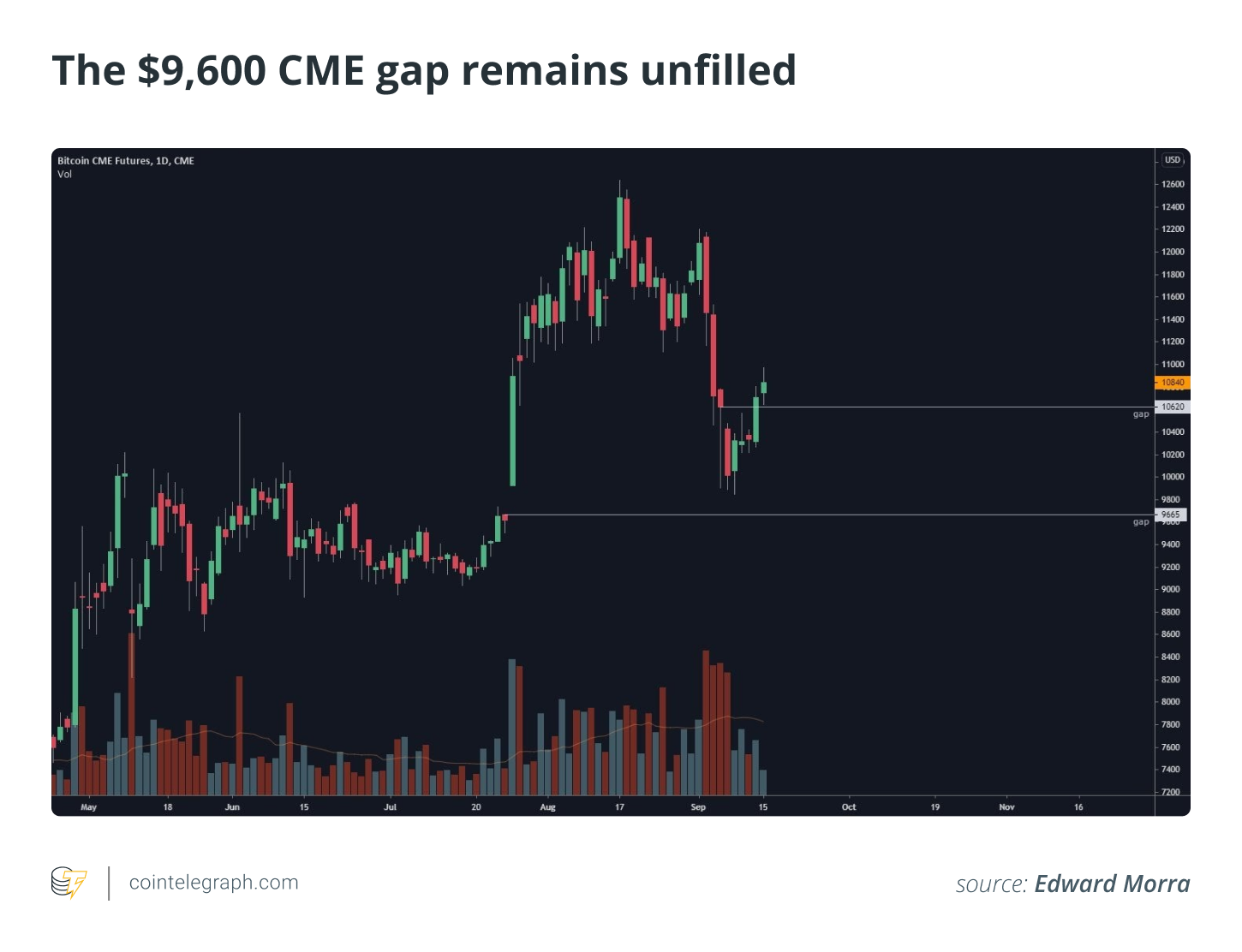 Data from market analysis firm CryptoCompare shows that the average transaction value of Bitcoin has stabilized. Throughout August and September, active addresses have increased but have since stagnated. Active addresses directly reflect user activity on the Bitcoin blockchain network. The stagnation of the metric could increase the chances of a pullback in the near term. CryptoCompare analysts stated:

“Is this a sign that bigger, perhaps institutional, players are getting more involved in the space? Active addresses for #Bitcoin are stable at the moment, while #Ethereum’s momentum is dropping, possibly reflecting the recent pull back from the #DeFi space, following a very active period.”

There are two variables that could have a direct effect on the price of Bitcoin. First, cryptocurrency trader Cantering Clark said profits from Ether and DeFi are likely moving back into Bitcoin. Whether that would redistribute to altcoins after a potential BTC rejection remains unclear.

Clark clarified that BTC would likely move back down to the $10,100 area in the near term. When it does, there is a chance that the profits that initially moved back into BTC could be redistributed to higher-risk assets, which include DeFi tokens. For now, Clark emphasized that both ETH and DeFi seem weak:

“Considering it looks like there is a rotation taking place at this point between assets, I think that regardless of where we move up to, that we end up coming back down to around 10.1 area. Just keeping it real. ETH and Defi seem a little cooked.”

Second, Liesl Eichholz, an analyst at Glassnode, said that the fundamentals of BTC are starting to drop off after the strong rally. Network growth, network activity, liquidity and market sentiment have all slightly declined. The four on-chain data points suggest that a pullback following a steep 4.5% rally within a seven-day period is likely. Despite the weakening fundamentals, Eichholz noted that the accumulation of BTC by HODLers continues to increase.

Bitcoin price dives back under $16,900 as whale deposits spike again

Ethereum Is the Best-Performing Asset Class of 2020